The Giants Causeway located in Antrim is a result of volcanic activity 50 to 60 million years ago. I wondered why it didn’t look like the lava fields in Hawaii. It isn’t just because Hawaii is a relatively young lava flow, it is the age, composition of minerals and water conditions that make it look the way it does. I don’t think Hawaii will ever take on the characteristics of the Giants Causeway 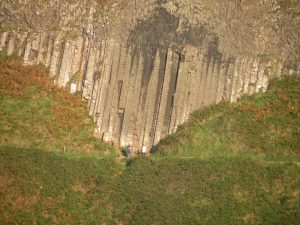 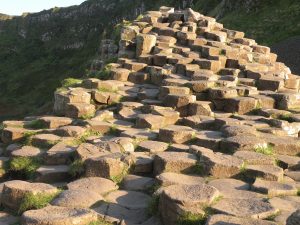 There are similar rock formations to this in Scotland and of course with the gift of the blarney, the Irish came up with a story. Reproduced here compliments of Wikipedia.

According to legend, the columns are the remains of a causeway built by a giant. The story goes that the Irish giant Fionn mac Cumhaill (Finn MacCool), from the Fenian Cycle of Gaelic mythology, was challenged to a fight by the Scottish giant Benandonner. Fionn accepted the challenge and built the causeway across the North Channel so that the two giants could meet. In one version of the story, Fionn defeats Benandonner.[9] In another, Fionn hides from Benandonner when he realises that his foe is much bigger than he. Fionn’s wife, Oonagh, disguises Fionn as a baby and tucks him in a cradle. When Benandonner sees the size of the ‘baby’, he reckons that its father, Fionn, must be a giant among giants. He flees back to Scotland in fright, destroying the causeway behind him so that Fionn could not follow.[10] Across the sea, there are identical basalt columns (a part of the same ancient lava flow) at Fingal’s Cave on the Scottish isle of Staffa, and it is possible that the story was influenced by this.[11] 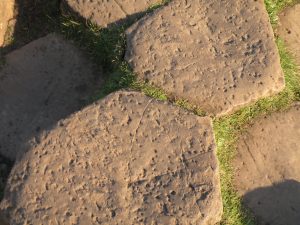 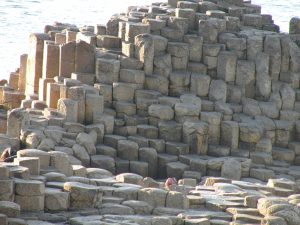 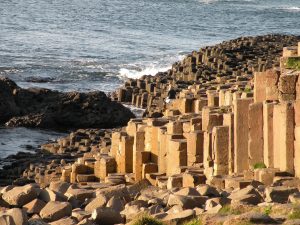 I had the pleasure of sitting next to Cory Knot, Youtube star of the Adventure Gent, on a train from Wexford to Dublin last Sunday. He had just taken a ferry from France to Ireland and was on his way to surf the west coast of Ireland, which was part of a four month odyssey that will be the subject of his next Youtube episode. I was showing him the pictures from the Giant Causeway and he told me about a similar formation in Mammoth called the Devil’s fingers. Now the Irish in me wants to say that the giants fought their way around the world until it ended in Ireland with the fulfillment of the legend.